The Story of The Little Black Rake

Residents in the Gladwin County area may already be familiar with the Little Black Rake that has been developed locally by Mary and David Moore of Stone Cottage Gardens in Gladwin.

Originally taken from a design known as the Super Rake, which was majorly used to rejuvenate shag carpet, the Little Black Rake became its own product in December of 2019. The process of creating the physical rake itself was lengthy according to Mary and David.

According to Mary, the numerous amounts of sales from the Super Rake eventually drove her and her husband, David to start thinking of creating their own rake of a similar design.

“Particularly, some of the landscapers would get after us about getting a new mold made because they really liked it,” Mary said.

The head of the rake looks different than a more traditional household rake. It features two sets of tines, with the rear set offsetting the front set in order to catch anything that may have been left behind. The rake has been quite the multi-purpose rake according to Mary.

The process for bringing the rake to life took roughly five years according to Mary and her husband, David. A large part of that process was creating a mold for the rake head. When the duo first began approaching places that could create a mold for their rake, they were shocked by cost quotes reaching nearly $300,000. They decided to do more research in order to find someone who could create the mold at a much lower cost.

During this process, David recalls speaking to some of the local professionals such as Bob Balzer with the Gladwin County Economic Development Corporation about how to continue with their development. After that, the Moore’s were sent to “person after person after person.” They eventually wound up working with the Central Michigan University Research Corporation (CMURC) to establish different pricing structures.

While working with CMURC, David and Mary developed different surveys and questions concerning the rake and received a lot of valuable information on some changes that could be made.

David was later able to find a local plastics developer that was willing to work with him and Mary only because of the shirt David was wearing the day they met.

“We met with a plastic [manufacturer] who originally said ‘get out of my office,’” David said. “Well, I happened to have a Stone Cottage Gardens shirt on and he said ‘come here, you can sit down; my wife goes to your place.’ Otherwise I’d probably still be looking for a plastic guy.”

The head of the rake is made out of a thermoplastic known as polypropylene which allows for the rake’s weight of just over a pound. The material is also very flexible and helps the user to push down on the rake and bend the head to create a stronger grip and pull without the user having to bend his or her back or causing damage to the rake itself. The rake is advertised to be “practically indestructible” on its website (www.littleblackrake.com) even while made of 100 percent recyclable materials.

The rake’s components are crafted throughout many different locations, nearly all within about an 80 mile radius of Gladwin. The only exception is the handle which is created in North Carolina, according to David.

“The people here in Gladwin were so welcoming to help us with this,” Mary said.

The Arnold Center of both Gladwin and Midland were willing to take the lead on the assembly and packaging of the rakes. The Moore’s felt very grateful to have all of the local support they had in their development process.

“We have been blessed all along and we are very thankful for that,” David said.

David and Mary brought the rake to a home and garden show in Wisconsin back in February of this year. They had future plans to bring it to other shows as well, however, due to the COVID-19 regulations, those shows have all since been canceled. They continue to look forward to the future and many more opportunities to show off their Little Black Rake.

For more information about the Little Black Rake, please contact us here or call us directly at 989.965.0259. 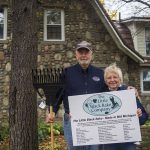 How The Rake Was Bornraking 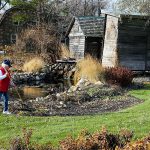